During Listen observations on March 1, the SUPERB (SUrvey for Pulsars and Extragalactic Radio Bursts) system, running in parallel with the Listen backend instrument at the Parkes Radio Telescope in Australia, was triggered by a short, bright burst of radio waves, prompting the Listen team to save the raw data from their instrument for detailed analysis.

This is not the first time that Listen has picked up one of these mysterious and fleeting bursts – in August 2017 FRB121102, the only FRB known to repeat, was caught in the act by the Listen team using the Green Bank Telescope in West Virginia. But this event, FRB180301, is the first new FRB source that Listen has discovered. 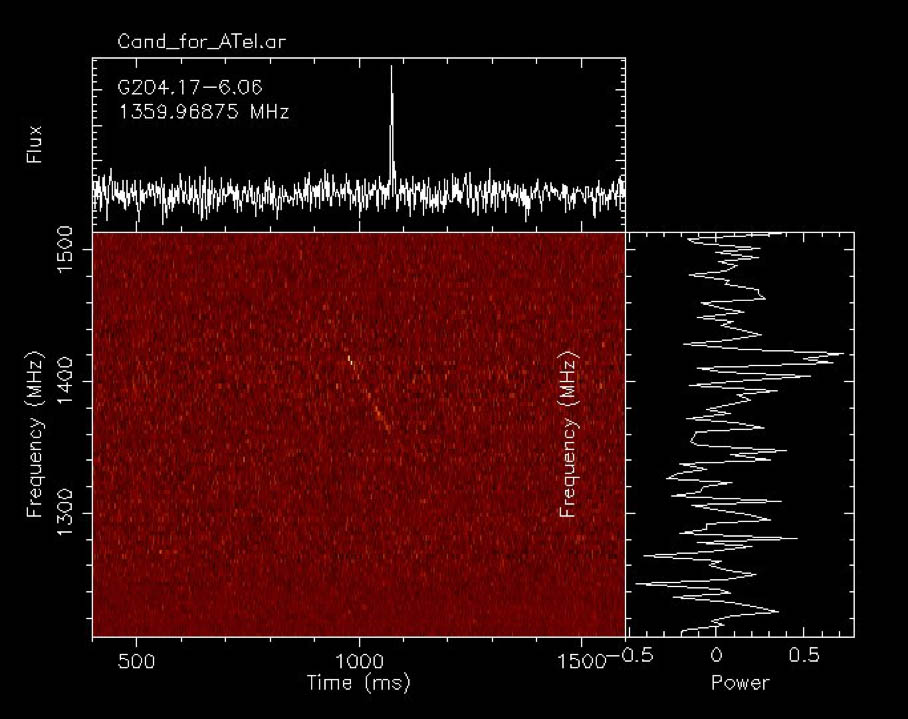 Detection of FRB 180301 with the Breakthrough Listen backend instrument at the Parkes Radio Telescope. The top panel shows the de-dispersed pulse while the bottom panel shows the frequency structure with the pulse dispersed across ~340 MHz of the observed band.

Astronomers are still largely in the dark about FRBs – only several dozen have ever been detected. But some intriguing details can be inferred. Firstly, they exhibit a tell-tale sweep in frequency that suggests they are extremely far away – billions of light years. But they only last a few milliseconds, meaning the emission mechanism is probably short-lived. For us to detect them clearly after such a long journey, they have to be almost unimaginably bright emissions. As Listen and Harvard physicist Avi Loeb put it, “There is no known astronomical source that generates radio bursts at such a high brightness, which is tens of billions of times brighter than the known population of pulsars, for example.”

What can produce such violent bursts? Leading theories involve neutron stars and cataclysmic cosmic events; but Dr Loeb and his colleague Manasvi Lingam have also examined the possibility that they could be evidence of interstellar extraterrestrial travel.

The Listen team at UC Berkeley, Jodrell Bank Observatory and Swinburne University of Technology have written up the initial details in an Astronomer's Telegram, to encourage follow-up observations with other facilities. In the meantime, the team will be looking at the raw voltages recorded by its digital systems, allowing them to investigate the burst in finer detail than has been done in the past. Whether or not FRBs prove to be of artificial origin, Listen’s observations could help solve the mystery of what creates them.

If you'd like to access the data from these observations (along with instructions for reading the technical "filterbank" format), they are available here.