Breakthrough Listen has begun observations of a million nearby stars with the MeerKAT Array.

Vanderbijlpark, South Africa – December 1, 2022 – Breakthrough Listen – the initiative to find signs of intelligent life in the universe – announced today, at a conference organized by the South African Radio Astronomy Observatory (SARAO), the start of observations using a powerful new instrument deployed to the MeerKAT radio telescope in the remote Karoo region of South Africa. The new search for technosignatures – indicators of technology developed by extraterrestrial intelligence – expands the number of targets searched by a factor of 1,000. 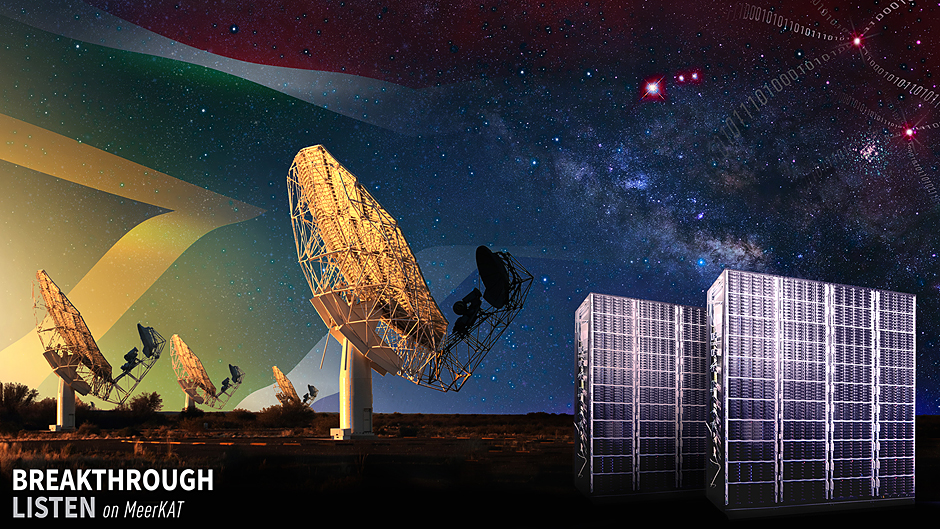 Artist's impression of the MeerKAT telescope in South Africa, and the Breakthrough Listen compute cluster, scanning the sky for possible signals (represented as binary codes) from extraterrestrial intelligence. One of the first targets to be observed by the new instrument will be the Alpha Centauri system, represented as the three stars towards the top right of the image. Credit: Danielle Futselaar / Breakthrough Listen / SARAO.

The astronomers and engineers on the Breakthrough Listen team have spent the last three years developing and installing the most powerful digital instrumentation ever deployed in the search for technosignatures, and integrating the equipment with the MeerKAT control and monitoring systems in cooperation with SARAO engineers. The new hardware complements Listen’s ongoing searches using the Green Bank Telescope in the USA, the Parkes Telescope in Australia, and other telescopes around the world. But while Listen’s programs at the GBT and Parkes involve moving these thousand-ton-plus dishes to point at targets all over the sky, the program on MeerKAT usually won’t mechanically move the antennas.

“MeerKAT consists of 64 dishes, which can see an area of the sky 50 times bigger than the GBT can view at once,” explained Breakthrough Listen Principal Investigator Dr. Andrew Siemion. “Such a large field of view typically contains many stars that are interesting technosignature targets. Our new supercomputer enables us to combine signals from the 64 dishes to get high resolution scans of these targets with excellent sensitivity, all without impacting the research of other astronomers who are using the array.”

By operating in this “commensal” mode, Breakthrough Listen gains access to one of the world’s most capable and sensitive radio telescopes almost 24 hours a day, 7 days a week. The ability to scan 64 targets at a time within the main field of view also improves Listen’s ability to reject interfering signals from human technology such as Earth-orbiting satellites. The Listen team had to develop sophisticated targeting and scheduling software to ensure the survey goals could be met in the desired timeframe1. They have also developed an automated data processing pipeline that scans through the data in near-real-time to search for interesting signals.

Breakthrough Listen is also working with SARAO to develop research opportunities for astronomers and data processing experts in Africa on this cutting-edge program. The search for life in the Universe has become a major focus area for research internationally, and the Breakthrough Initiatives are leaders in the field.

“I am very excited to be able to conduct a search for technosignatures using one of the most sensitive telescopes in the world,” remarked Dr. Cherry Ng, Breakthrough Listen’s Project Scientist for MeerKAT. “It will take us just two years to search over one million nearby stars. MeerKAT will provide us with the ability to detect a transmitter akin to Earth’s brightest radio beacons out to a distance of 250 light years in our routine observing mode.”

Dr. Fernando Camilo, Chief Scientist for SARAO, the observatory that built and operates MeerKAT, is also excited about the new search.

“MeerKAT has a remarkable combination of sensitivity and survey speed, which makes it a wonderful telescope for SETI,” said Camilo. “The telescope was planned and developed here in South Africa, and it’s very exciting that young South Africans will have the chance to be involved at the forefront of the search for life beyond Earth.”

“One of the first targets we’ll be observing is our nearest neighbor star, Proxima Centauri, which appears to host two small rocky planets in the star’s habitable zone,” said Breakthrough Initiatives Executive Director, Dr. S. Pete Worden. “Routine observations with the Listen backend on MeerKAT are now underway, and the team looks forward to sharing the first science results in the coming months.”

Breakthrough Listen is a scientific program searching for evidence of technological life in the Universe. It aims to survey one million nearby stars, the entire galactic plane and 100 nearby galaxies at a wide range of radio and optical bands. Additional information: breakthroughinitiatives.org.

The South African Radio Astronomy Observatory (SARAO), a facility of the National Research Foundation (an agency of the Department of Science and Innovation), is responsible for managing all radio astronomy initiatives and facilities in South Africa, including the MeerKAT radio telescope in the Karoo, and the geodesy and VLBI activities at the HartRAO facility. SARAO also coordinates the African Very Long Baseline Interferometry Network (AVN) for the eight Square Kilometre Array (SKA) partner countries in Africa, as well as South Africa’s contribution to the infrastructure and engineering planning for the SKA-Mid radio telescope. To maximize the return on South Africa’s investment in radio astronomy, SARAO is managing programmes to create capacity in radio astronomy science and engineering research, and the technical capacity required to support site operations.